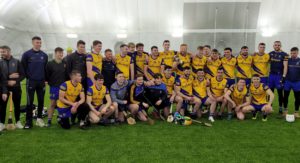 New Roscommon senior hurling manager Francis O’Halloran has guided his side to their first silverware of 2022 after they kept Sligo’s third quarter comeback at bay to be crowned Connacht Hurling League champions at the NUI Galway Connacht GAA Dome this evening.

Roscommon prevailed by 2-27 to 1-21, thanks to a commanding first-half performance and a solid final quarter showing after the Yeats County had eroded a six-point interval deficit to a point at one stage in the third quarter.

The Rossies’ intensity and workrate was everything the new management team would have wanted in the opening half as they took a deserved 0-17 to 1-8 lead into the half-time break.

Cathal Dolan (0-8) and Daniel Glynn (0-6) were in fine scoring form as Roscommon were easily the better side, despite Gerard O’Kelly-Lynch’s 25th minute goal for the Yeats County.

O’Kelly-Lynch was at the heart of his side revival after the break, scoring a number of frees as Roscommon appeared to tire.

But the water break came at the right time for them and Eoin Fitzgerald’s goal moments after the restart settled them again.

With Matthew Comerford, Conor Cosgrove, Eoin Fitzgerald and Dolan delivering sterling performances, Roscommon closed out the deal, thanks to substitute Adam Donnelly’s green flag, to leave them in fine fettle ahead of their upcoming National Hurling League Division 3A campaign.