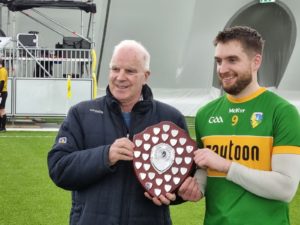 The Leitrim hurlers’ historic provincial shield success on Friday evening was influenced by the captaincy of a Roscommon club footballer.

Seán Markham, who plays with Michael Glaveys in the county senior football championship, captained his adopted county to a 2-24 to 0-24 victory against Mayo at the NUI Galway Connacht GAA Air Dome.

Lining out at midfield, Markham pitched in with two points from play. A former Tooreen and Mayo hurler, Markham has been living in County Leitrim for the past number of years.

Roscommon meet Sligo in this evening’s cup final to see who will be crowned inaugural Connacht Hurling League champions.

🏆🏆🏆 Well done to Sean Markham on captaining the Leitrim senior hurlers to victory over Mayo in the Connacht League Shield final at the NUI Galway Connacht GAA Air Dome this evening. Leitrim beat Mayo 2-24 to 0-24. Not a bad start to Sean’s Leitrim career. pic.twitter.com/3Ir5WhE7BZ