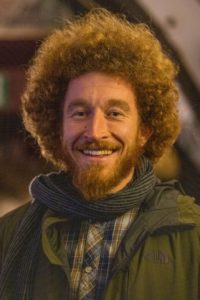 Local man James Cuddy and his family gained fans all around the country as worthy finalists in Ireland’s Fittest Family.

However, James, who is living in Monksland, is again challenging himself, deciding to part with his iconic ‘fro to raise money for Join Our Boys.

In a social media post earlier this month, James announced that “the fro must go”, saying his hair will be getting the chop this Saturday January 29th in aid of Archie, George, and Isaac Naughton.

He is inviting people to donate on his idonate page and leave their preference for his new hair. The options are Mohawk Viking, Mullet & Mo, and the nuclear option, Everything must Go. James is staying diplomatically silent on his preference.

“The lockdown last year was when I started growing the hair and it has escalated to this point,” he said with a laugh. “When we were doing the show, I said I won’t cut it now, because if things go badly I can just cut it and no one will know it was me.”

It also had the added benefit of helping to secure his safety helmet during the show’s arduous tasks. “You’d always see people losing helmets in the show so I had no problem with the helmet falling off.”

He said he was happy to raise money for the Join Our Boys Trust and thanked everyone for their donations. His target is €7,777 and he has already reached €4,613.95. People will be able to donate to the page until March 1st.

“I raised money for the boys at the end of 2020 and I saw recently that the Trust is trying to get the house finished for them, so I thought I’d give it a push.”

He is also delighted to have taken part in Ireland’s Fittest Family. “Myself and mum, in particular, we do triathlons and adventure racing and everything was cancelled last year. It was the one thing that went ahead.”

Roscommon mum Paula Naughton and her husband Padraic issued a heartfelt thanks to James Cuddy for his fun and creative offer of support to raise funds to complete the purpose-built home for their three beautiful and courageous sons.

“As finalists in Ireland’s Fittest Family, the Cuddys are famous for their courage and tenacity. Archie, George, and Isaac have no doubt that James will reach his target and look fabulous too,” the family said.

All proceeds will go towards the house completion project, and you can make your donation and choice of hairstyle for James on his idonate page, the Fro Must Go.

In 2012, Archie was six and the twins George and Isaac were two and a half when all 3 boys were diagnosed with Duchenne Muscular Dystrophy (DMD). DMD is a catastrophic muscle wasting disease which will eventually impact on the boys’ ability to walk, use their limbs, or even hug the people they love. Those who live until their late teens are likely to become totally paralysed and will eventually die of respiratory and or heart failure. Archie, George, and Isaac are all paralysed and in wheelchairs. They are now struggling to use their arms.

The Join Our Boys Trust was set up in 2014 and its aim is twofold; to design and build a purpose-built house that will accommodate Archie, George, and Isaac for as long as they require it, and to fund research into finding a cure for DMD disease.

Since the Join Our Boys Trust was established, enough money has been raised to build the house, which is in Roscommon Town and the property of the trust. However, an additional €300,000 is required to ensure the house is fully kitted out with the equipment needed to ensure the boys’ complex needs are adequately met. This includes a ceiling hoist, automated doors, specialised beds, a therapy area, specialist IT equipment, specialist toilets, landscaping, a road, and many other things. The family also needs to fund the on-going running costs of the property.

The Naughton family feels there is finally light at the end of the tunnel and, with continued support, very soon will be in the purpose-built house. To donate to Join Our Boys, please visit www.joinourboys.org/donate/.