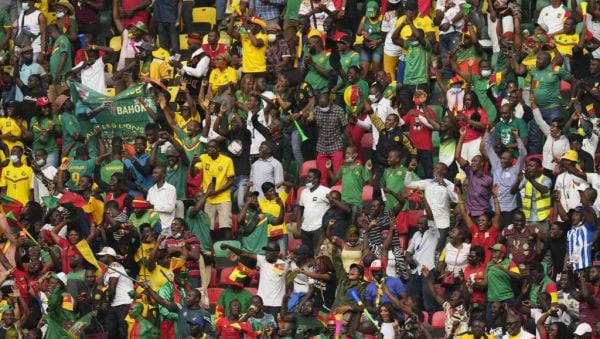 At least six people are reported to have died following a stampede before the Africa Cup of Nations game between tournament hosts Cameroon and Comoros.

The incident, which is also said to have left 40 injured, occurred before Monday’s round-of-16 tie in the Olembe area of the capital Yaounde.

Reports say fans were involved in a crush as they attempted to make their way into the Paul Biya Stadium, a 60,000 capacity arena named after Cameroon’s president.

A statement from the Confederation of African Football read: “CAF is aware of the incident that took place at Olembe Stadium during the TotalEnergies Africa Cup of Nations fixture between hosts Cameroon and Comoros tonight, 24th January 2022.

“CAF is currently investigating the situation and trying to get more details on what transpired.

“We are in constant communication with the Cameroon government and the Local Organizing Committee.

The stadium, which hosted the tournament’s opening ceremony, was built in preparation for the delayed competition, which kicked off earlier this month.

Stadiums have been operating at 80 per cent capacity during the Africa Cup of Nations due to restrictions placed on organisers because of the coronavirus pandemic.

Premier League club Everton tweeted: “The thoughts and prayers of everyone at Everton are with the families of those fans who have lost their lives and anyone affected by the tragic events at today’s #AFCON2021 match between Cameroon and Comoros in Yaounde. RIP.”

The thoughts and prayers of everyone at Everton are with the families of those fans who have lost their lives and anyone affected by the tragic events at today’s #AFCON2021 match between Cameroon and Comoros in Yaounde. RIP 💙💙💙💙💙💙

Cameroon won the game 2-1 to set up a quarter-final date with Gambia.

Jimmy Abdou was sent off after seven minutes as Comoros, minus a recognised goalkeeper due to injury and coronavirus, saw their fairytale run end.

Comoros, ranked 132 in the world, were without the injured Salim Ben Boina for the round-of-16 tie in Yaounde while fellow goalkeepers Ali Ahamada and Moyadh Ousseini had both tested positive for Covid-19.

Ajaccio’s 5ft 8in left-back Chaker Alhadhur took over in goal for a Comoros side who were without several outfield players and coach Amir Abdou to coronavirus.

Karl Toko Ekambi and Vincent Aboubakar were on target as Cameroon secured a quarter-final date with Gambia, but it was not without concern as Youssouf M’Changama thundered home a 30-yard free-kick nine minutes from time.

Alhadhur had barely touched the ball when Abdou received his marching orders for stepping on the back of Moumi Ngamaleu’s ankle.

The former Plymouth and Millwall midfielder was banished after Ethiopian referee Bamlak Tessema Weyesa was advised to go to the VAR monitor.

Comoros, who had booked a last-16 place by beating four-time African champions Ghana, refused to give up and Cameroon keeper Andre Onana made a superb double save from Ahmed Mogni and Mohamed Youssouf.

Toko Ekambi – with Cameroon’s only effort on target in the first half – broke the deadlock after 29 minutes by finding the bottom corner of Alhadhur’s net.

Alhadhur blocked an Aboubakar header at the start of the second half with his legs, before producing a smart double stop to thwart the former Porto striker and Ngamaleu.

Gambia had upset Guinea earlier with a 1-0 victory in Bafoussam.

Guinea, who were without suspended Liverpool midfielder Naby Keita, struck the woodwork twice in the final seconds.