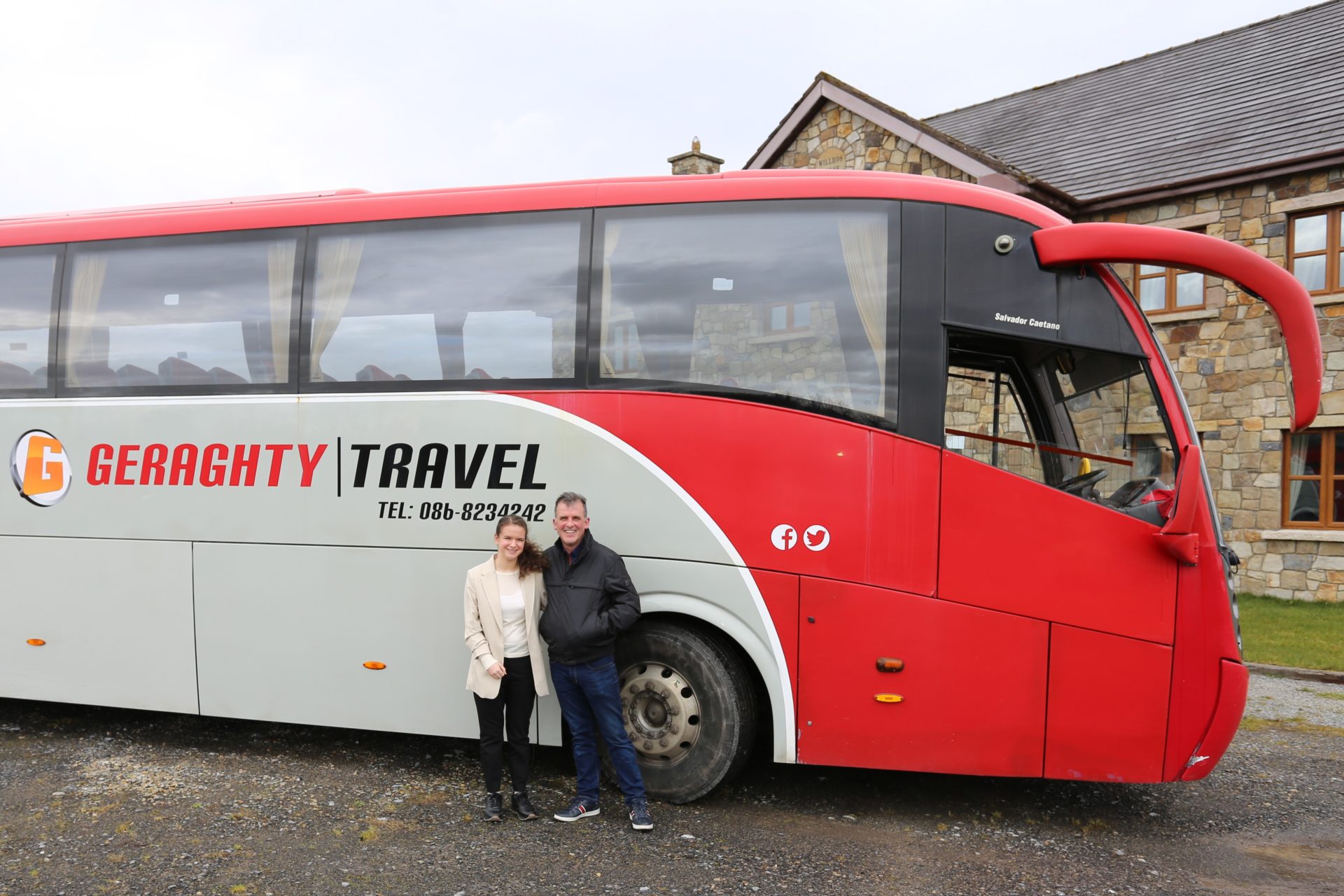 Aidan Geraghty with his daughter Gemmisha.

It’s been a few days now since bus company owner Aidan Geraghty launched a GoFundMe page: he’s raising money to get one of his 52-seater coaches to the Ukrainian border, where he hopes to carry vital supplies to the war-torn region.

He’ll be driving the bus – but this is much bigger that just him or his Castlerea-based company, he tells the Herald.

Aidan credits his daughter, Gemmisha, with the idea. While watching television together, she suggested to her father that he do something to help Ukrainians fleeing war.

Gemmisha, a Transition Year student at the Convent of Mercy Roscommon, will be accompanying her father on the 27,000km journey. “Wild horses wouldn’t stop my daughter from coming out… nothing was going to stop her going,” Aidan says.

Three other drivers – Michael Roddy, Tom Jennings, and Austin Waldron – will make the trip, along with PJ D’Arcy, a mechanic.  Ava D’Arcy, PJ’s daughter, will also be on board.

Where exactly they will be heading is still uncertain. The every-changing scenario on the border means that Aidan may not know his final destination until after they set off, on the eve of St. Patrick’s Day.

As things stand, they’ll be tuning their sat-navs to a community centre in Zamosc, a city in the south-east of Poland, about 130km from the major Ukrainian city of Lviv.

Before they head off, Aidan and the crew will stop off with the volunteers at Galway Racecourse, where supplies are being collected and catalogued before being dispatched to the continent.

“They’ll have a load ready for us, of what they need out there,” Aidan explains.

After that, it’ll be time to hit the road. Aidan’s driven in Europe before, but he’s under no illusions – there’ll be some unforeseen challenges.

“You think it’s all dandy and it looks perfect on the map until you get there… we will come across hiccups,” he says.

One challenge will arise on the journey home. Aidan hopes to fill his bus with Ukrainians fleeing the conflict on the return leg of the trip – but securing temporary visas for travel through the UK might pose an issue.

“For us to get through now, we’ll have to do visas for everybody, we may have to do Covid test for everybody,” he says. Aidan has been in touch with TD Michael Fitzmaurice, who is liaising with the British Ambassador to facilitate passage.

“We’re doing our bit in our way, and hopefully we’ll do some good,” Aidan says. “And hopefully highlight to the powers that be… the Irish government have really stepped up, but there’s big hassle in the UK.”

Aidan stresses that his whole team is making the trip free-of-charge: any excess funds raised will be going towards the assistance of Ukrainian refugees.

For those who want to contribute towards the Geraghty Travel efforts at the Ukrainian border, the GoFundMe page can be accessed at: https://www.gofundme.com/f/coach-to-ukraine-and-back-campaign.