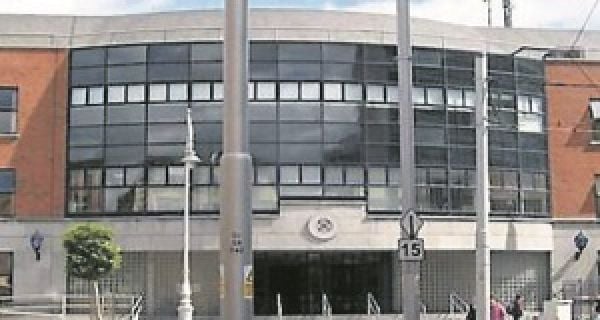 A tourist swung his girlfriend from the ground by her hair during a drunken assault outside a Garda station in Dublin, a court has heard.

Lewis Good (28) from Brony Y Waun, Chirk, Wrexham in Wales, received a 60-day prison sentence for the incident after he pleaded guilty at Dublin District Court to a litany of charges arising from the first night of a two-day city break.

Judge John King heard that in the early hours of Saturday, gardaí at Store Street Garda station heard a “female screaming just outside the door of the station” and then saw the accused and his girlfriend at the taxi rank at Busáras.

“As the male was shouting, he grabbed her with two hands by the hair and swung the female around,” the court heard. The judge also heard “her feet left the ground”.

Two gardaí ran out and caught Good “stumbling away”, adding there was “a very strong smell of liquor” from him.

He refused to give his identity and was taken to the station where he became abusive and continued to refuse to divulge his name or address.

The judge noted Good’s girlfriend, who did not wish to give a victim impact statement, had no visible injuries.

Good, who was granted legal aid, pleaded guilty to assault, violent behaviour in a Garda station, threatening and abusive behaviour, being intoxicated in public, and refusing to give his name.

Solicitor Conor McGreevy pleaded for leniency, asking the judge to note that the accused had no prior convictions.

Mr McGreevy said Good arrived in Dublin on Friday and began drinking “very heavily”. However, he was “profoundly apologetic” to gardaí and his partner.

The court heard he was in full-time employment and had a permanent address with his family in the UK.

Mr McGreevy also asked the judge to note the early guilty plea and how Good met the case.

The assault was under section two of the Non-Fatal Offences Against the Person Act for an attack that did not result in physical injury. It carries a maximum six-month sentence.

For the assault charge, relating to section two of the Non-Fatal Offences Against the Person Act, Judge King imposed a 60-day sentence, taking the other offences into consideration.

The judge set recognisances in the event of an appeal by Good, bail in his bond of €1,000 with a €500 cash lodgement.