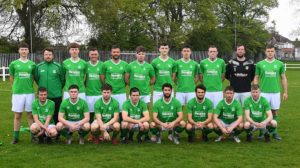 Boyle Celtic have taken a major step towards winning the Roscommon and District League Premier Division title with a superb 2-1 victory against Ballinasloe Town at the Curragh grounds, Ballinasloe, this afternoon.

Both sides were level on points with four games remaining ahead of the Bank Holiday Monday showdown. Boyle Celtic’s goal difference was slightly superior but on the back of this win, Jake McCrann’s side have put themselves firmly in the box seat to become Premier Division champions.

A huge crowd saw both teams create chances in the opening half but the teams remained deadlocked at the break.

However, goals from Darren Foley and Finbar Cregg sent Boyle on their way to a famous win, despite Gary Egan replying for a Ballinasloe Town side who will represent the Roscommon and District League in the Connacht Cup final later this month.