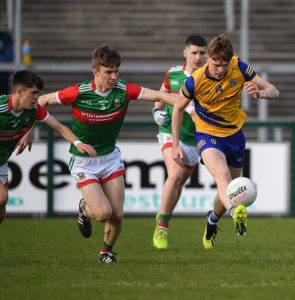 The Roscommon minor footballers’ provincial championship hopes are hanging by a thread after Leitrim hit 1-2 in injury time to share the spoils, 1-13 apiece, at Avant Money Páirc Seán MacDiarmada this evening.

Robert Heneghan’s goal a minute into the three minutes indicated for injury time put James Duignan’s five points to the good, and seemingly on course for victory.

However, Roscommon’s game management left a lot to be desired during a pulsating finale as a point by Leitrim wing-back Dara Greenan was followed by a goal by Paul Honeymoon. Then, to rub salt into Roscommon’s wounds, Honeymoon popped up with the equaliser as referee Anthony Coyne played five minutes of additional time — two more than the amount indicated.

Still, it was no more than the hosts, who were managed by former Western Gaels player Adrian Dockery, deserved as they spurned a number of guilt-edged goalscoring opportunities during the game.

They led by 0-7 to 0-6 at half time but their inability to take at least one of the goal chances they created looked like coming back to haunt them when points from Brendan Murphy and Rory Carthy, alongside Heneghan’s goal, put the visitors five points to the good.

But Roscommon couldn’t hold out, although they had every reason to question the amount of injury time played by the referee.

As a result, Roscommon must beat Sligo in their final group game at Dr. Hyde Park and hope that results go their way elsewhere.