Minor team picked for ‘do or die’ clash against Leitrim 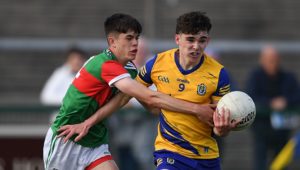 Conor Kelly and his Roscommon team-mates will be looking for a first win of the campaign against Leitrim this evening. Picture: Gerard O’Loughlin

Roscommon minor football manager James Duignan has revealed his starting 15 for this evening’s “do or die” clash against Leitrim in Carrick-on-Shannon.

Having lost their opening two games against Galway and Mayo, Roscommon must defeat their hosts at Avant Money Páirc Seán Mac Diarmada to harbour any hope of sneaking into a semi-final.

The team sees four changes from the side beaten by Mayo seven days ago, with Mark Halligan (Boyle) and Ronan McDermott (St. Dominic’s) coming into the half-back line. Brendan Murphy from St. Brigid’s gets a start at midfied, with Rory Carthy reverting to centre-forward. John Curran from Castlerea St. Kevin’s, his side’s goalscorer against Mayo, is picked at corner-forward.

The team is, once again, captained by full-forward Robert Heneghan from Michael Glaveys.

Roscommon U17 manager James Duignan has named his team to face Leitrim in this evening’s Connacht U17 Football Championship – Round 3.

Tickets must be purchased in advance.

The match will also be Live Streamed.