Hurlers produce best performance of the season to topple Tyrone 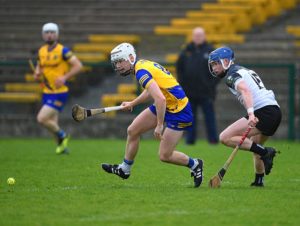 Ben McGahon and his Roscommon team-mates were in great form against Tyrone this afternoon.

A terrific first-half performance from the Roscommon senior hurlers laid the foundation for an excellent 3-24 to 0-21 victory in the Nickey Rackard Cup against Tyrone at Dr. Hyde Park.

The visitors, who had won the Division 3A League title and were unbeaten all season, came to the Hyde with high hopes but they were rocked back on their heels by an in-form Roscommon side that produced their best performance of the season.

Tyrone edged the early exchanges, but once Daniel Glynn converted a tenth minute penalty, Roscommon were on their way.

Francis O’Halloran’s men hit an unanswered 1-7 coming up to half time — the goal coming from Brendan Mulry — to lead by 2-13 to 0-9 at the break.

Led by the excellent Damian Casey, Tyrone staged a mini-revival in the third quarter and eroded the deficit to five points.

But Roscommon settled once more and a series of excellent scores from Eamon Mulry, Mickey Joe Egan, Connell Kennelly, Glynn, a free from his own 45-metre line, and Man of the Match Conor Cosgrove reasserted Roscommon’s dominance before substitute Adam Donnelly finished a brilliant counter-attack to the net in injury time to give his side a 12-point victory.

The result pretty much guarantees that Roscommon will be in the final ahead of their final group match away to Fermanagh next Saturday.

With a superior scoring difference, and with Tyrone to host Donegal next weekend, the Rossies can start planning for the decider in Croke Park on Saturday, May 21st.