Roscommon players recognised at Team of the Year awards 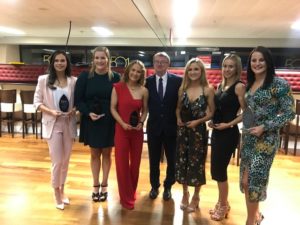 Roscommon’s magnificent league campaign, which saw Ollie Lennon’s side become Division Three champions, was recognised on Friday evening when six players were feted at the annual Team of the League awards.

Goalkeeper Helena Cummins, Sinéad Kenny, Niamh Feeney, captain Laura Fleming, Jenny Higgins and Aisling Hanly were in Croke Park to receive their awards, alongside members of the Roscommon management team and offices from the local LGFA county board.

The selection of six players was a ringing endorsement for Roscommon’s successful league campaign, which saw the “Primrose and Blue” edge out Wexford 0-9 to 1-5 in the final to earn promotion to Division Two in 2023.

🎊 Congratulations to Helena, Sinead, Laura, Jennifer, Aisling and Niamh on their team of lge awards. 👏
At least one night of training off – have a good night 🟨🟦#ballymore pic.twitter.com/8hV8zEdcOg