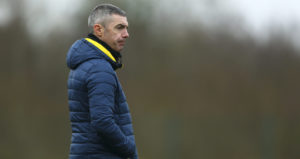 The new manager of the Roscommon junior camogie team is expected to be ratified at a meeting of Roscommon Camogie Board this evening.

Gordon is also a well-known intercounty hurling referee and took charge of yesterday’s Munster Senior Hurling Championship clash between Limerick and Tipperary at the Gaelic grounds.

The Killimor native, who will be joined on his management team by Galway underage academy coaches Cian Ryan and Eoin Hardiman, has been taking training for the past month in the aftermath of Browne’s departure, which was only confirmed at the beginning of April.

Roscommon open their All-Ireland Premier Junior Championship campaign with home games against Antrim on May 21st and Limerick on May 28th before facing trips to Armagh and Down on June 11th and July 2nd.

It has been a difficult season for the team who were forced to withdraw from the National League after failing to field in two of their fixtures.