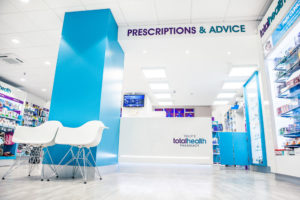 A County Roscommon pharmacy has been nominated for a number of health awards. The Irish Pharmacy Awards recognise the dedication of all pharmacy teams.

The pharmacy was also nominated for the GSK Self-Care Award and the Roche Diagnostics Points of Care Testing Pharmacy of the Year Award.

Meanwhile Nial’s sister, Sheena Mitchell from Miltown totalhealth Pharmacy in Dublin has been nominated for an award in the Uniphar Category Development of the Year Award.

“This year, we received over 300 entry applications for the Irish Pharmacy Awards from some of the most accomplished and dedicated pharmacists and pharmacy teams across Ireland,” the publication said. “The volume of entries made the shortlisting process incredibly difficult for our esteemed panel of judges.” The winners will be announced at the awards ceremony on Saturday, May 21st.