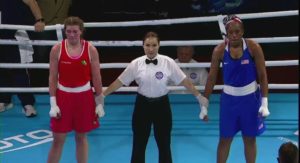 Disappointment in Istanbul for Aoife O’Rourke

The Castlerea woman took to the ring this afternoon for her first fight at the IBA Women’s World Boxing Championships 2022 in Istanbul.

Graham defeated O’Rourke in the semi-finals of the Strandja tournament in 2021 and won today’s bout on a split decision. The American boxer will go on to face Tammara Thibeault of Canada on Saturday.