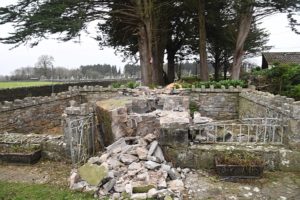 The grotto that was destroyed by fallen trees in recent high winds. Pic. Gerard O’Loughlin

A fundraising campaign is underway in the Cloontuskert area to restore the area’s grotto which was damaged in a storm last December.

The grotto at Cloontuskert was erected in 1987 to commemorate the Marian Year and to honour Our Lady of the Rosary. On December 8th, 2021 during Storm Barra, it was extensively damaged by a falling tree.

A committee has been formed to take on the task of rebuilding the grotto. The total cost of the rebuild, including replacing the statue, is €3,000.

The committee has set up an I Donate page for anyone wishing to be associated with its rebuild or donations can be given directly to committee members.

The committee is appealing to the local community for its support and generosity “to fully restore the grotto and once again make it a focal point to honour Our Lady”.

The following will gratefully accept any donations towards the project – treasurers Dympna Trautt, Aine Brady or Johnny Malone, and Sean Carty.