Lola hopes to give a voice to the migrant community 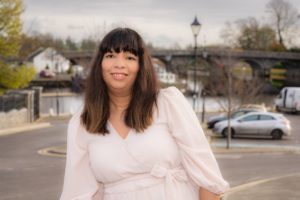 Lola Gonzalez hopes to give a voice to the migrant community in Carrick-on-Shannon when she runs as an Independent candidate in the Local Elections in 2024. Pic. Keith Nolan

When Lola Gonzalez moved to Carrick-on-Shannon seven years ago from her native Panama in Central America she was amazed to discover that migrant people like herself could vote in the local elections. She was, however, disappointed to see a lack of ethnic and gender diversity in the make-up of county councils around the country. Now after many years of work in the community and migrant sector she has decided to run as an Independent candidate in the local elections in 2024.

Lola originally became involved with the migrant community and began to research the political landscape in Ireland and that’s when she discovered the See Her Elected project.

She initially signed up for the Introduction to Politics course with See Her Elected a number of years ago and has now progressed onto more intensive workshops as she prepares to put her name on the ballot paper in the Carrick-on-Shannon Municipal District for the next local elections.

“I feel that migrants and migrant women, in particular, are lacking a voice on our county councils,” said Lola. “We have difficult challenges, there are language barriers or cultural differences, and many migrants don’t fully understand the range of services available from their council, whether that’s around housing or environment or information about childcare.

“Many migrants still don’t realise that they can vote in the local elections so that’s also a big challenge in helping to get the migrant community on the Register of Electors,” said Lola.

The flexibility and accessibility of the online SHESchool classes, part of the See Her Elected project, were a major attraction for Lola.

“I was working full time and I loved the flexibility of SHESchool as the classes were available at lunch time or the evening and they were all free and online.

“I have attended classes with other organisations in the past but what makes See Her Elected so different is that personal connection, there is a great mentoring aspect to it, and I find Kathleen O’Meara and Michelle Maher great. We also got to hear the stories of so many other women and other guest speakers to hear from their experiences which is so helpful,” said Lola.

A former chairperson of the Leitrim International Community Group, Lola has lived in Carrick-on-Shannon for the past seven years and previously worked in the retail sector before recently taking up a new job as an inclusion and EU project specialist with Momentum Consulting in the Co Leitrim town.

She was also delighted to be selected by the Immigrant Council of Ireland to take part in an internship whereby she shadowed councillor Sean McGowan in Leitrim County Council for a number of months last year. Seventy applicants went for the internship and Lola was selected for one of only 11 available spaces.

With her eyes now firmly set on the local elections in 2024, Lola says that she wants to give a voice to the migrant community and also be a voice for women.

“At the moment they are almost invisible in our county councils, and I want to change that,” she said.