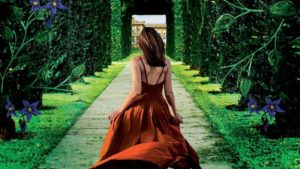 The Belladonna Maze by Sinead Crowley is published by Head of Zeus.

RTE’s Arts and Media Correspondent Sinéad Crowley has chosen County Roscommon as the setting for her latest mystery thriller.

She began writing what would become her fourth novel, The Belladonna Maze, in the middle of the pandemic.

The mystery thriller has a dual narrative – one storyline focuses on a young nanny and is set in 2007 while the other takes place in the 1800s around the time of the Famine.

“Hundreds of story suggestions ping into my inbox every week but in as soon as I heard about the Memento Mori exhibition I felt it would work beautifully on television, so I headed off to Strokestown House in Co Roscommon to find out more.

“My trip west happened in May 2021, the morning after I had handed in the final draft of my novel, The Belladonna Maze, to my editor. My book is set in Hollowpark Hall, a fictional Palladian mansion in Co Roscommon and tells the story of two women, Deirdre Fitzmahon who lives in the house during Famine times and Grace, a nanny who works as a nanny for the Fitzmahon family in 2007. As it happens, one of the characters, Isla, is a sculptor, and works in a tower, a stand-alone structure located a little distance from the main house.

“Hollowpark Hall isn’t based on one house in particular but was inspired by a number of places I’ve visited during my years with RTÉ. From concerts at Slane Castle to festivals at Stradbally Hall, Lego exhibitions at Castletown House and tours of Russborough, I’ve been lucky enough to visit some of the finest buildings in the country and take a peep at life backstage. However although I set my book in Roscommon – partly inspired by childhood visits to Lough Key Forest Park – the one Big House I can’t remember ever visiting was Strokestown,” she explained.

The Belladonna Maze by Sinead Crowley is published by Head of Zeus.