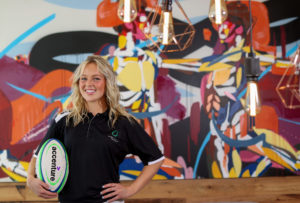 A Roscommon woman, who made her international debut earlier this year, has been nominated for a prestigious rugby award.

Aoibheann Reilly is in contention to be named WHOOP Women’s 15s Young Player of the Year at the upcoming Rugby Players Ireland awards, sponsored by Accenture. The winners will be announced at a ceremony in the Clayton Hotel, Ballsbridge, on May 18th.

Reilly — who will battle it out with Eve Higgins and Neve Jones for Women’s Young Player of the Year — was present at the launch of the awards on Wednesday in Dublin alongside Ireland men’s international Andrew Porter.

Reilly made her Six Nations rugby debut at scrum-half against Wales at the end of March in the RDS.

Daughter of Stephen and Fionnuala Reilly, Aoibheann’s brother Colm is part of the Connacht Rugby men’s first team squad where he also plies his trade at scrum-half. Colm and her another brother, Donnacha, were part of Pádraig Pearses minor football championship-winning squad in 2015.

She is a past pupil of Creagh National School. Republic of Ireland women’s soccer international Heather Payne and rugby international Beibhinn Parsons are also past pupils of the South Roscommon school.