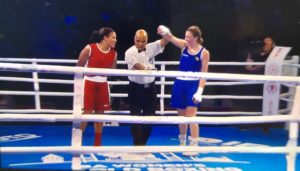 Lisa O’Rourke has won her second fight at the Women’s World Boxing Championships following a clearcut victory against Moronta Hernandez of the Dominican Republic in Istanbul this afternoon.

The Roscommon woman, who was celebrating her 20th birthday, was the more controlled fighter throughout and landed the clearer punches in what is another huge win in her burgeoning career.

Hernandez was on the front foot in the opening round but O’Rourke, who was cheered on by her sister Aoife, bided her time to score freely.

Four out of the five judges gave the first and second rounds to O’Rourke and when the result was announced, the Tarmon native was declared the unanimous winner.

She has now qualified for the quarter-finals of the light middleweight category where she will box again on Monday.