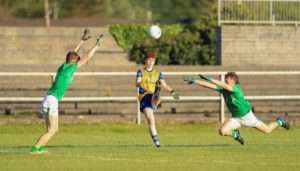 Ryan Dowling will be hoping that the Roscommon minors can get their championship season back on track against Sligo next Friday. Picture: Bernie O’Farrell

The Roscommon minor football team will face Sligo in a potential “winner takes all” championship encounter on Friday evening next.

James Duignan’s side lost their opening two games against Galway and Mayo before drawing with Leitrim, and they will have home advantage against the Yeats County for the most pivotal match in their season.

But, it appears, that they’ll have it all to do as Sligo defeated Leitrim by 4-18 to 2-15 in this evening’s high-scoring encounter in Markievicz Park, meaning that a win for the Yeats County will see the defending champions reach the semi-final against Galway who suffered a surprisingly heavy 1-15 to 0-4 defeat against Mayo at Tuam Stadium.

A Roscommon victory against Sligo will, in all probability, see them reach the semi-final against the Tribesmen to see who plays Mayo in the final, unless Leitrim can shock Galway and substantially improve their scoring difference.