Roscommon striker on target for Ireland 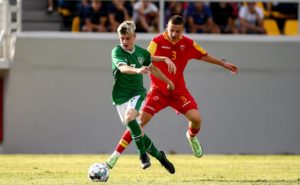 Christian Donlon-Golcalves in action for the Republic of Ireland U-15 team.

A young Roscommon striker helped the Republic of Ireland U-15 soccer team to a facile 6-0 victory by scoring his first goal for this country on Thursday.

Christian Donlon-Goncalves was among the scorers for Jason Donohue’s side as they easily disposed of Uzbekistan to record their first win at the Vlatko Markovic tournament in Ludberg, Croatia, having drawn 0-0 with Montenegro on Wednesday.

The former Ballyboro FC player entered the fray in the 41st minute and made a significant impact, scoring his side’s fifth goal before leading a counter-attack and setting up Darragh Marshall for a sixth after the goalkeeper had saved his initial effort.

Christian currently plies his trade with Shamrock Rovers and is a former St. Faithleach’s GAA Club player and Roscommon Community Games gold medal winner. He made his international debut for the Republic of Ireland U-15 team last September.

The team are back in action later today as they take on Croatia where a win will secure a place in Sunday’s final.