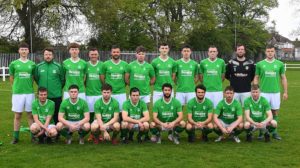 Boyle Celtic are the top dogs in the Roscommon and District Football League for the first time in 35 years after they picked up the point they needed, and two extra along with it, in their final game of the season against Ballymoe FC at their home field of Celtic Park tonight.

Despite holding a three point lead over Ballinasloe Town and a comfortable advantage in terms of goal difference, the rules of the RDFL dictated that if Celtic lost out to Ballymoe this evening and Ballinasloe were to win their final game against St. John’s Athletic tomorrow, then a playoff would be needed to determine the league winners.

On paper, this should have been a handy fixture for the champions-in-waiting against the bottom of the table side, albeit Ballymoe still had a chance to climb out of the relegation zone if they picked up a win. That outcome looked like a real possibility when Michael Kenny fired in a penalty for the underdogs in first half stoppage time.

There was a noticeable step up in intensity from the home side after half-time however, and they got the breakthrough they needed from top scorer Shane Battles just short of the hour mark. Battles added a second just six minutes later, and the celebrations could really get underway when David Flanagan made it 3-1 to Celtic in the 82nd minute.

While this represents a first league title in Roscommon since 1986-87, Celtic were victorious on three occasions in the Sligo-Leitrim league, including two in the last ten years.

For a full report on this game, check out next Tuesday’s Roscommon Herald.

New sports for a post-Covid-19 Roscommon