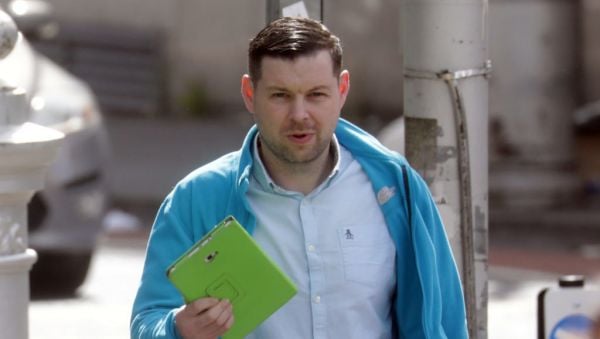 A Sinn Féin election worker has been given a nine-month prison sentence for robbing a chronically ill pensioner while hanging campaign posters in Dublin.

Sean Fitzgerald (34), of Galtymore Road, Drimnagh, Dublin 12, was carrying Mary Lou McDonald posters when he got into a row with motorist William Ryan (78) at Cromwellsfort Road, Walkinstown, on January 29th, 2020.

Dublin District Court heard he hit Mr Ryan’s car with his stepladder, sat into the pensioner’s front passenger seat, filmed him and tried to stop him calling gardaí.

The trial heard the victim, who has breathing difficulties, was knocked over a wall into a garden. Fitzgerald sat on his chest and told him, “you won’t be needing these anymore,” before taking his phone and car keys.

Fitzgerald, who had 23 prior criminal convictions, pleaded not guilty to the robbery but was convicted.

Mr Ryan told the court Fitzgerald and another man were hanging posters of the Sinn Féin leader. Fitzgerald had a stepladder and stood in the middle of the road.

The pensioner said he drove past the accused, who “hit the passenger door with a ladder deliberately”. He recalled that he pulled over, and Fitzgerald hit his car again with the ladder. He kept his windows shut and started to ring the Gardaí.

Fitzgerald “got into the front passenger seat in my car and continued to video me,” Mr Ryan alleged.

In cross-examination, he explained that he got out of his Nissan Qashqai because Fitzgerald “tried to grab my phone off me”.

The victim alleged Fitzgerald tackled him into the front garden of a house. He said he was “sitting on my chest and grabbed my phone and the keys off me, I was hardly able to breathe”.

He denied losing the phone and keys in the garden.

The court heard the incident left him nervous and scared.

Investigating Garda Wei Li arrived at the scene after the incident. He told the court Fitzgerald came back because he had lost his own mobile phone in the garden. He picked it up “and ran away again”, leaving his ladder behind.

Garda Li and colleagues searched the garden but could not find anything belonging to Mr Ryan.

He left a message at Fitzgerald’s home to get in contact.

That night, the accused called the officer at Crumlin Garda station and denied taking the phone or keys.

Forty-five minutes later, he phoned Garda Li again and said they were in the garden.

However, he denied putting them back there. Instead, in a later garda interview, he tried to convince the officer that Mr Ryan was driving aggressively, at speed, flashing his lights and shouting.

He claimed he did not get in the car but filmed through the open front passenger window. He stated Mr Ryan had grabbed his hand when he was on his ladder.

He contended that he pulled away from his grip, lost his balance and fell over a garden wall and that the complainant fell behind him.

The father of two maintained he then continued putting up posters on lampposts.

Finding him guilty, however, Judge Hughes held Fitzgerald did not tell the truth and that a term of imprisonment was appropriate.

The accused’s criminal record had 10 previous convictions under the Road Traffic Act, one for assault, three public order offences, four drugs charges, and possessing a weapon, failing to appear in court and criminal damage.

His counsel asked the judge to note he worked full time in the hospitality industry and was a “contributing member of society”.

The judge said it was traumatic for the victim, given his age and ill health.

He imposed a 10-month term but suspended the final month provided Fitzgerald does not reoffend in the next two years and has no contact with the victim.

In the event of an appeal, the judge set recognizance bail in his bond of €500. He also required a €500 independent surety to be approved by the court.