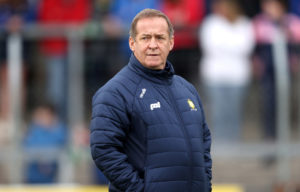 Clare senior football manager Colm Collins has revealed that he is delighted to see his players getting the chance to play Roscommon in Croke Park on Saturday evening.

There has been plenty of disquiet, especially among supporters of Mayo, Roscommon and Clare, that they’re being forced to make the journey east in the current climate for Saturday evening’s double header but Collins, speaking to the Irish Examiner, felt that it was “positive” to see the games being played at GAA headquarters.

“Everyone wants to play in Croke Park. When the draw came out, I thought it would be fixed for Salthill. Delighted to get Croke Park, delighted the lads have an opportunity to play there.

“Everyone has their own view on it, but I think any time your own county gets a chance to play in Croke Park, it is a good thing. And I think the more often you play there, the better.

“That’s all I can say on that, and I do fully appreciate that everybody’s situation is different,” he said.

Roscommon have far more experience playing in Croke Park, including winning the Division Two League title against Galway at the beginning of April.

But Clare’s record against the Rossies is very promising from the Munster side’s perspective, having beaten them in the 2016 qualifiers before sharing the spoils against Anthony Cunningham’s men in the league at Dr. Hyde Park earlier this year.