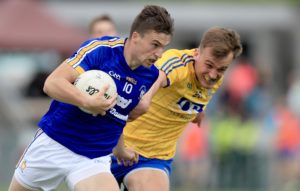 Clare’s Jamie Malone and Roscommon’s Enda Smith in action when the sides last met in the championship in 2016. Picture: INPHO/Donall Farmer

Despite conceding “a lot of scores” in the Connacht final, former Meath footballer and Sunday Game pundit Colm O’Rourke feels that Roscommon are favourites to reach the All-Ireland senior football quarter-finals at Clare’s expense.

Previewing this weekend’s fixtures on RTÉ’s Morning Ireland, O’Rourke felt that Clare might not be capable of taking advantage of Roscommon’s porous defence, and he expected the Rossies’ greater firepower to prevail.

“It’s a pity that these counties have been brought to Croke Park. If Clare and Roscommon were playing in Galway it probably would be a much better atmosphere.

“I watched the Clare game against Meath last week and they were full value for their win; Colm Collins is still doing a remarkable job with them.

“Roscommon’s last outing was in the Connacht final, where Galway beat them fairly easy. I was impressed with the Roscommon spirit even though they were a bit passive in the whole game, quite unusual for a Roscommon team. The best part of their team are the forwards, but they do leak a lot of scores.

“Clare might not be able to take advantage of that and I think Roscommon are more likely to win this one,” he felt.

O’Rourke also predicted that Kildare, Cork and Donegal will join the Rossies in the last eight of the championship.