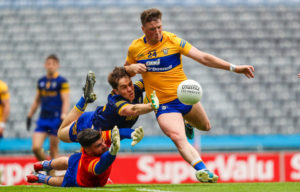 It looked like their second half surge would be enough, but Anthony Cunningham’s Rossies were sucker punched by Clare in the closing minutes of this afternoon’s All-Ireland SFC contest at Croke Park, conceding 1-3 from the 68th minute onwards to lose out by the minimum margin.

The final score was tight and there were plenty of moments when things might have gone a different way, but Roscommon can have no complaints with this defeat as they spent most of the first half trying to find their feet, and were flattered to be only two points adrift at half-time.

A Diarmuid Murtagh goal in the sixth minute represented a dream start, but all it did was briefly stem the incessant tide of early Clare pressure, with Cathal O’Connor, Ciarán Russell and Eoin Cleary all very influential in central positions for the Banner men.

Ciaráin Murtagh’s sharpshooting kept Roscommon in the game throughout the half, while there were occasionally good cameo moments from Ultan Harney, Eddie Nolan, Conor Hussey, Brian Stack and Cian McKeon, but in general Roscommon’s attacking play was far slower than that of the Clare men, when Keelan Sexton scramble the ball over the line after 19 minutes, Clare took a lead that they wouldn’t relinquish until well into the second half.

Points from Diarmuid Murtagh and Niall Kilroy just before half-time halved the gap and gave the Rossies a bit of momentum that they carried into the second 35 minutes. Clare opened the scoring with just 30 seconds gone after the restart through a 45 metre free from Keelan Sexton, but from then on Roscommon went on an 0-9 to 0-1 run over the next 32 minutes, including six points in a row.

Donie Smith, Richard Hughes and Keith Doyle all chipped in with points from play off the bench as Roscommon pushed up, forced mistakes and turnovers on the Clare side, and generally took control of the game.

When Ciaráin Murtagh clipped over his fifth point, and his only free of the day, to make it 1-17 to 1-12, that looked like it should have been enough. Instead Clare hung un, earned a penalty, and once Keelan Sexton slotted that home, they had all the momentum going into the closing moments. A clutch 50 metre free from Sexton levelled the game, and after Clare held possession for two minutes, Jamie Malone stepped forward to deliver a decisive finish that was a dagger to the heart of Roscommon supporters in Dublin 3, and back home, alike.

For a full report, reaction and analysis from Croke Park, check out Tuesday’s Roscommon Herald.