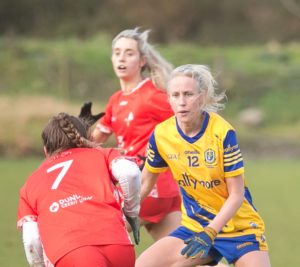 Caroline Conway in action against Louth earlier this year.

Despite succumbing to a second-half comeback by Longford, the Roscommon intermediate ladies’ football team are still in the All-Ireland quarter-finals where they will play Louth on Sunday, June 26th.

Ollie Lennon’s side were edged out in a thriller this afternoon, 3-12 to 3-9, at Glennon Brothers Pearse Park.

Roscommon were in a good place at half time as goals from Jenny Shine and Natalie McHugh put them six points ahead. But the concession of two goals immediately after the restart eroded confidence and the home side went on to prevail by three points.

Roscommon and Louth met earlier this season in Division Three where a fine second-half performance procured a narrow 2-5 to 2-4 victory for the visitors in Cooley.