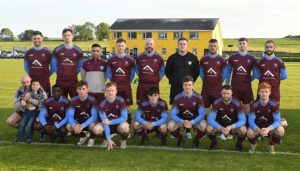 Shiven Rovers have won the prestigious Roscommon and District League Challenge Cup for the first time in its history, upsetting Premier Division champions Boyle Celtic at the League Grounds, Lecarrow, this afternoon.

The North Roscommon side were the warmest of favourites but Matthew Barrett’s emphatic finish from an acute angle in the 62nd minute gave the East Galway club, who is celebrating its 50th anniversary in 2022, a historic victory.

The opening half was cagey but Shiven, who had been beaten in their last four Challenge Cup final appearances, created the best chance when Adam Farrell fired wide of the post in the 12th minute.

Try as they might, Boyle Celtic couldn’t breach Shiven’s last line of defence and the Newbridge-based side, once Barrett had found the net, held on for one of the most famous victories in its proud history.