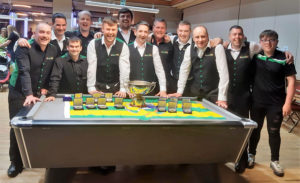 The Leitrim pool team that won the All-Ireland title recently.

Three pool players from County Roscommon helped Leitrim win a first All-Ireland Inter-Counties Pool Championship in Killarney at the end of May.

Jamie Gaffney from Ballyfarnon, Niall Sweeney from Cootehall and Wayne Kilmartin from Kilteevan played pivotal roles in the final against Tyrone at the prestigious tournament staged at the famous Gleneagles Hotel.

Leitrim were drawn Armagh, Cork, Cavan, Louth and Mayo in the group stages, with the top two teams qualifying for the knockout stages.

Leitrim faced Cork in the last four and prevailed 14-6 by playing some flawless pool.

In the final, Niall Sweeney and Wayne Gilmartin won a frame apiece before Jamie Gaffney stitched together a championship-winning break to give Leitrim the title on a 14-9 scoreline.