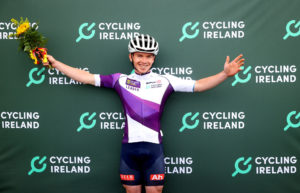 Daire Feeley is the new leader of the Rás Tailteann. Picture: INPHO/Ryan Byrne

Daire Feeley is the new leader of the Rás Tailteann after another superb ride on Stage Three of today’s race.

The Roscommon cyclist finished second on today’s stage into Lisdoonvarna but, for the second day in succession, he was heavily involved in the day’s main action to take the yellow jersey and the outright lead in the race with just two stages remaining.

Feeley started the third stage in eighth place on General Classification following a strong showing on Thursday’s stage into Castleisland, one minute and ten seconds behind the leader.

He duly got himself into the stage’s major break, which contained nine cyclists, and surged clear with Adam Ward who won the stage.

It is another major feather in Feeley’s cap, who will hope to go on and achieve the biggest win in his career over the coming days.