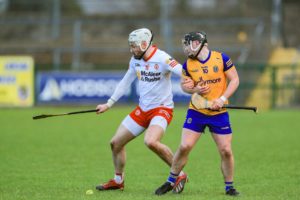 The Eoghan Ruadh forward was the star player of his side’s Nickey Rackard Cup triumph earlier this season, scoring 0-14 in a Player of the Match performance when Tyrone defeated Roscommon by 1-27 to 0-19 in the final in Croke Park.

That game was Casey’s 40th senior appearance for the county. The 29-year-old had the remarkable record of scoring in every championship game, amassing an aggregate 414 points.

Roscommon played Tyrone three times overall in 2022, with Casey imperious and virtually unmarkable on each occasion.

He scored 0-12 when the sides shared the spoils in the opening round of the Division 3A League at Dr. Hyde Park in February, while he hit 0-11 during his side’s defeat against the Rossies in the group stages of the Nickey Rackard Cup.

Having experienced Casey’s wizardry from placed balls and play this season, Roscommon GAA said it was deeply saddened to hear of the Tyrone hurling star’s passing, adding that “Damian gave a masterclass in hurling on each occasion that we played each other this year.”

“A giant on and off the field.”

In a statement, Tyrone GAA Chairperson Michael Kerr said: “Damian Casey was a special gift to Tyrone and to hurling. We were the richer for his presence and are the poorer for his passing.”

All in Roscommon GAA and Roscommon Hurling are deeply saddened to hear of the passing of @TyroneGAALive & @DGNHurlingclub player Damian Casey.

Damian gave a masterclass in hurling on each occasion that we played against each other this year.

A giant on and of the field. #RIP pic.twitter.com/89L6tEOEbN