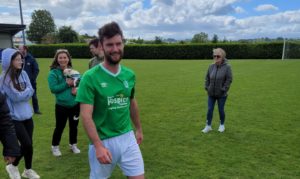 However, while Boyle’s dramatic 2-1 victory sealed the deal, helped by McCrann’s injury-time winner, it was the midfielder’s opening goal that will be talked about for some time.

With his team trailing 1-0 as a result of Josh McCarthy’s 22nd minute goal for Ballinasloe Town, McCrann equalised with a strike right out of the top drawer after 56 minutes.

Picking up possession, a quick turn edged him past a Ballinasloe midfielder before he took aim from well inside his own half after spotting goalkeeper John Cotter off his life. Much to the delight of a large Boyle Celtic following, the ball sailed over the back-pedalling Cotter and into the net for what must surely rank as the Goal of the Season in the league.

It was fitting that McCrann went on to grab the winner, exchanging passes with Adam Dwyer before rifling a left-footed shot into the roof of the net deep into stoppage time to send the Premier Division Cup back to North Roscommon.