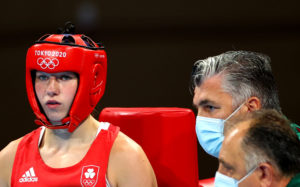 County Roscommon Olympian Aoife O’Rourke returned to winning ways over the weekend after winning a gold medal in her weight class at the Haringey Box Cup in England.

The Tarmon boxer, whose sister Lisa was crowned World Boxing champion last month, defeated Demi Carter in the final of the Female Elite 75kgs division at the famous Alexandra Palace.