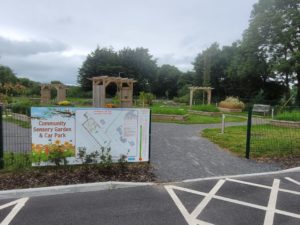 The sensory garden and car park at Ballybay, Kiltoom.

After years of hard work, the sensory garden and car park at Ballybay Kiltoom were officially opened recently. Locals, politicians, and the clergy attended the ceremony, with even the ever-threatening rain holding off to allow people to celebrate the occasion.

Granted planning permission in 2019, the 80-space car park has been in operation since the spring of last year and has been a huge help to students attending the local school, children training at Hodson Bay Celtic FC, and people attending Mass. It has significantly helped address road safety issues at the site.

The sensory garden which was planned around the theme of the five senses, has also become one of the area’s most popular spots with people of all ages. A group of dedicated local volunteers works to keep the garden, which has beautiful flowers such as marigolds and foxgloves, plants, and herbs, well maintained. The lands being used belong to the diocese but with the assistance of parish priest Fr Michael McManus, a lease on the lands was made over to the project’s committee. Work started on clearing the triangular parcel of land, which is beside the N61, in late 2020.

A significant portion of the funding for the project, approximately €65,000, was raised locally with €150,000 coming from Roscommon LEADER grant aid. The project’s overall costs are just over €230,000, with further fundraising required to meet outstanding costs. 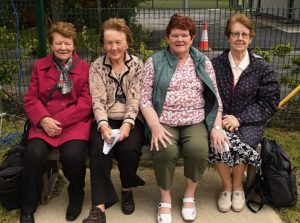 Local woman, Mae Cunningham, was MC at the event and she welcomed the large crowd of people to the official opening and ecumenical blessing. Bishop of Elphin Dr Kevin Doran and Mr Nigel Foley Fisher, representing the Church of Ireland blessed the garden and car park. Local parish priest Fr Michael McManus and Fr Ray Milton were also in attendance. Four pupils, Amy, Lilly, Laura, and Molly, from Ballybay NS read the prayers of the faithful.

The chairman of the development committee, Pat Leonard, thanked everyone for attending the ceremony. He also thanked Bishop Doran for allowing the site to be used and Fr McManus for his continued support.

“About 20 years ago there were plans drawn up for a car park which didn’t go ahead for a number of reasons. Then in 2018, I was approached by Fr Michael to look into the development of the car park,” he said. He also took the opportunity to thank former committee chairman, Michael O’Brien, for his work while on the committee. He thanked a number of others including committee members John Tiernan and Tom Shine who drew up the plans for the project and worked on the planning permission and LEADER funding applications. Paddy Kenny and Ciarán Toohey were also thanked for helping to oversee the works. Gratitude was expressed to Roscommon LEADER Partnership, St Brigid’s GAA Club, local politicians, and the local community for their support. The pupils and staff of Ballybay NS, garden volunteers, and the Ballybay Hall Community Hall Committee were also thanked.

Mr Leonard pointed out that in the garden is a plaque to Nurse Bridget Leonard, who was a native of Moyvannion, Kiltoom. She went to school in Ballybay NS and secondary school in Athlone. An aunt of Mr Leonard, she was working as a nurse at Salford Royal Hospital, Manchester, in 1941 when she was killed in an air raid at the age of just 23.

“When we started the project, it was suggested by Tom Joe Ennis, who visited the site in Manchester and saw the name on a memorial plaque on the hospital wall, that we should put something in her memory in the garden. That’s why we put the plaque there and it was sponsored by the Leonard family,” Mr Leonard said. 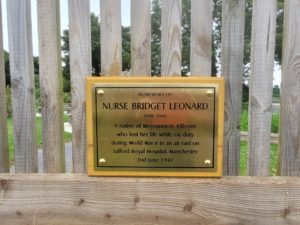 Plaque to Nurse Bridget Leonard, who was a native of Moyvannion, Kiltoom