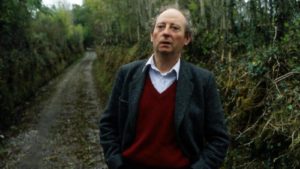 John McGahern, near his home in Leitrim, in 1990. Photograph: Frank Miller

A County Roscommon museum is to feature on the popular RTÉ Nationwide programme this week.

The John McGahern Barracks Museum will be profiled on Wednesday, June 22nd at 7 pm. The programme will give an insight into this wonderful project in Cootehall. It is understood that the programme was recorded earlier in the year.

The writer, John McGahern lived in the barracks in Cootehall from 1944 to 1953: his father was the serving sergeant there. He, his five sisters and young brother came to live in the barracks when their mother died. John was the eldest. He was nine years old.

John McGahern’s international reputation is founded on his detailed descriptions of the changes that took place in Ireland, particularly rural Ireland, during the latter half of the twentieth century. Many of his writings capture the people, their everyday life, cares and concerns, and the landscape of Leitrim and Roscommon in which he grew up and lived most of his life.