Decision on controversial Roscommon wind farm due by December 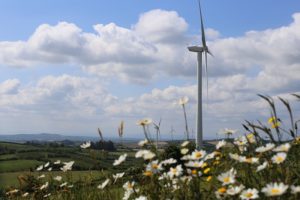 An artist’s impression of the proposal

A decision by An Bord Pleanála on a proposed €100 million wind farm for the county is due to be given by December of this year.

The planning application for the Seven Hills Wind Farm, which will be in South Roscommon, was lodged with the planning authority on June 7th. A decision by ABP is expected by December 5th and there is significant opposition to the plan.

Roscommon County Councillor, Tony Ward, said the local communities felt the project was being forced on them and that the council should be making the decision on the wind farm.

“Whether it’s An Bord Pleanála or the council, I would still strongly oppose turbines in any part of South Roscommon but especially in the Dysart/Taughmaconnell area,” he said. “In those areas, you have turloughs and the Killeglan Springs which supplies water to 80 per cent of the people in South Roscommon.”

The project was designated a strategic infrastructure development, or SID by An Bord Pleanála, which means it will decide on the application, but ABP will consult Roscommon County Council as part of the planning process

The application is seeking permission to build up to 20 wind turbines in the Taughmaconnell/ Dysart areas. The turbines will have an overall ground to blade tip height of 180 metres, a rotor diameter of 162m and a hub height of 99m. The proposal will also see a 110kV onsite substation in the townland of Cam, along with associated control buildings, a switchgear building, an electrical plant, and security fencing.

As part of the application, a permanent meteorological mast with a maximum height of 100 metres is proposed as is an underground cable of approximately 11.3km from the wind farm to the existing 110kV Athlone substation. This cable will be placed within the public road corridor of the R362, R363 and L2047, or on private land. The existing Athlone substation will also be upgraded to facilitate the cable’s connection.

The final layout of the proposed development, which was published in July last, has seven wind turbines to the northeast of Dysart, and 13 in the Taughmaconnell area, west of Brideswell. The application is seeking a ten-year planning permission and 30-year turbine operational period from the date of commissioning of the entire wind farm.

The developers of the wind farm, Energia Group and Galetech Energy Developments (GED), said the project will consist of up to 20 wind turbines with a typical output of 6-7 megawatts – enough to supply around 85,000 Irish households with renewable electricity every year.