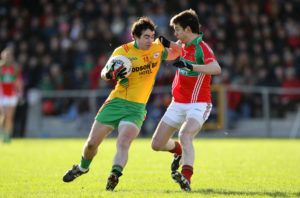 Roscommon senior football manager Anthony Cunningham has led the tributes to former Garrycastle player Enda Mulvihill who has passed away after a short illness.

Cunnigham famously managed the Athlone club to Leinster club glory in 2011, a journey that took them all the way to the All-Ireland final against Crossmaglen the following March.

It was a journey that included a famous 1-11 to 1-9 victory against Roscommon and Connacht champions at the time, St. Brigid’s, in Pearse Park, Longford, an All-Ireland semi-final that Enda Mulvihill played in.

“Too soon Enda, sad times for all, will miss your smile and banter, gentleman. RIP full-back,” posted Cunningham on the CoachFinder Twitter account.

A winner of six Westmeath SFC medals with Garrycastle, the popular and talented player was also part of Westmeath’s All-Ireland winning U-21 football panel in 1999.

The Athlone native, who was 43 years of age, was living in Clontarf with his wife Ruth and two daughters, Emily and Ella.

He died peacefully on Wednesday, June 22th, after a short illness very bravely borne in the Mater Private Hospital surrounded by his loving family.