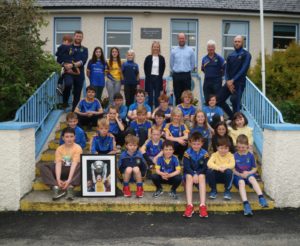 Clann na nGael members with teachers and pupils from Clonown NS on the occasion of their centenary.

A school in County Roscommon celebrated its centenary as it finished up for the summer holidays.

Club member and stalwart Liam Dunne recalled great players from the club that garnered a love for the game in Clonown, such as John Joe Shine, John Curley, the Gavins, the Shines and the Flynns.

He also wished Sixth Class pupils every success in what was their last day in the school.

The school said that the framed photo of David Flynn lifting the Tom Markham Cup would take “pride of place” in the school.