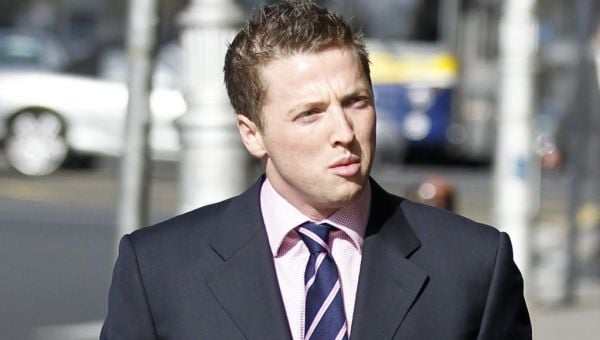 A former garda and another man have been jailed for drug and alcohol-fuelled assaults on two women, which culminated in one woman being bundled into a van and told she would be driven to the mountains and buried.

During the ordeal in April 2021, Dublin man and former garda Stephen Cooper (37) forced a woman to take part in a “strip search” after he claimed she had stolen drugs from him.

Cooper threatened the woman and then told her: “I used to be garda, I know how to do this” and “if you weren’t a thief, I wouldn’t have to do this”.

After forcing the crying woman to strip, Cooper then inserted his fingers into her body and repeatedly told her to shut up.

This assault took place at a house in Naas, Co Kildare at the tail end of a four-day drink and drug binge that had begun in a hotel elsewhere in the county.

The victim of this first assault was in a state of shock and left, the court said. Cooper, his accomplice Stephen McGrath (37) and a second woman then moved to a house in Ashfield, Kilteel Road, Rathcoole, Co Dublin.

When the two men began accusing this woman of stealing cocaine from them, McGrath began a prolonged and vicious assault, kicking and punching the woman repeatedly and tearing clumps of her hair out.

Both men told her at one point that they were going to bring her up the mountains and bury her. They then tried to lift her into the back of a van but she began screaming and kicking out and they stopped and instead put her in the footwell of the front seat.

Cooper handed McGrath a small multi-tool knife and McGrath told the woman “I am going to stick that in your head”. Cooper said to McGrath: “You have to take care of her or we are both ducked”, prosecuting counsel, Edward Doocey BL, told the court.

McGrath drove off with the woman as she begged him to let her live and told him she had a child. She later told gardaí that “every time she opened her mouth, he punched her”.

He also pulled down her trousers and sexually assaulted her, the court heard.

At their sentence hearing at Dublin Circuit Criminal Court, Judge Martin Nolan said the men’s behaviour was cruel beyond extreme, reprehensible and shameful.

“To say they ill-used these women would be a gross understatement. They terrified them, they threatened they, they assaulted them,” he said.

He said that the second victim must have believed she was going to die and that she was struggling for her very life.

“She must have been absolutely terrified of what was her future,” he said.

McGrath’s four previous convictions are for possession of drugs, dangerous driving and drink-driving and Garda Rob Whitty agreed with Patrick McGrath SC, defending, that these were minor by comparison with the offences before the court. He agreed that this incident was out of character.

Garda Whitty accepted that McGrath is genuinely remorseful and apologetic.

Cooper was jailed in 2014 for perverting the course of justice and drug dealing after he allowed a friend to take the blame when gardaí found the drug LSD during a search at the Electric Picnic music festival.

Maurice Coffey SC, defending, said Cooper came from a respectable family but that a once promising life was ruined by poor choices, particularly around drug use.

He said both men were seriously out of control on the night. He said his client accepts what happened to these women should not have happened and that this is backed up by the guilty pleas.

Mr Coffey said that after serving time for the earlier offences, Cooper got his life together, married and set up a business. He said his marriage broke down and his business was hit by the Covid-19 pandemic, leading Cooper to fall back into drug use and his life spiralled out of control.

Judge Nolan said he was taking into consideration the fact that both men had entered guilty pleas which were practical indications of their remorse and shame and saved the victims the trauma of coming to court.

He said both men had otherwise contributed to society and he said he had no doubt both men could be reformed or rehabilitated.

“I doubt either man would come before this court again for anything remotely as serious,” he said. Both men came from good families and have brought great shame to their families, he added.

He described Cooper’s assault of the first woman as humiliating and terrifying. He imposed a three-year prison sentence for this assault and another three-year prison term for the threats against the second woman, to run consecutively.

He said McGrath’s level of culpability was greater because of his treatment of the second woman in the vehicle, which he described as gross and cruel.

If you have been affected by any of the issues raised in this article, you can call the national 24-hour Rape Crisis Helpline at 1800-77 8888, access text service and webchat options at drcc.ie/services/helpline/, or visit Rape Crisis Help.