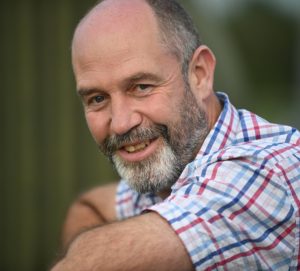 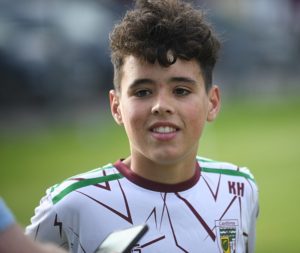 It’s a tough night for St Ciarán’s in the minor championship, as a plethora of absentees leaves them short-handed for their Division Three contest with Strokestown, and the East Roscommon club aren’t slow to take advantage.

St Ciaran’s take in a large chunk of territory around the Galway border, and even venture across it in places — so it’s not unheard of for players in their ranks to give their primary allegiance to the Tribesmen.

Adam Beckett is battling hard to stem the tide for the club, and no-one could question the young dual player’s commitment to the cause, but as his father, Wesley, explains, even when Adam pulls on the Roscommon jersey to represent the county, the family is still firmly ensconced in the Galway camp.

“We live in Galway, by the grace of God,” Wesley says, pointing out how Athleague and St Ciaran’s territory stretches across the River Suck.

“Adam goes to school in Ballygar, and he’s like myself, he’s Galway. He’s getting messages from all his mates and it’s not ‘well done’, it’s ‘ye got the easy draw’. Ah, he loves playing for Athleague and he loves hurling for Roscommon — that’s his club and county — but he was shouting for Galway in the Connacht final.”

Michael McDonnell, from Strokestown, is also there to watch the game, and despite having most of the width of the county as a buffer zone between himself and Galway — or Mayo — it’s plain to see what he considers to be the most ferocious rivalry.

“Galway are still easier to live next door to than the Mayo boys,” he says.

“Galway’s the only team that can go up to Croke Park and come home with a bit of respect. When they go there, they’ve a much better chance of coming home with something than Roscommon and Mayo, whether it’s tradition or whatever.

“Kerry probably will win it; not comfortably, but they will win. I’d say they’re afraid of their lives: Since 2009 or whatever, they’ve only beaten Donegal in a final, they’ve let a lot of potential All-Irelands slip since then.” Wesley is more worried about Kerry making a fast start, though he is hopeful that Galway keeping the Kingdom at bay in the early stages could bear fruit.

“I’d say Kerry will win. Galway will put up a good show, but Kerry are the better team. There’s a lot of pressure on Kerry, and the crowd might not be very patient with them — they could turn on them if they don’t start well.”

“Kerry could win handy. I’d be afraid that they might start well and put a gap between the teams, and Galway wouldn’t be able to make it up. The only thing is that they might feel like they’ve the job done; you saw it with Mayo last year: They beat Dublin and then didn’t show up for the final against Tyrone. Even Clare in the hurling this year, they put everything into the Munster final and then they expected to beat Kilkenny: Look what happened”.

So a message of hope for Galway, and indeed a message of comfort for their supporters. Even now, as they stand on the cusp of a fantastic victory, Roscommon supporters are happy to get behind them, largely on the basis that they’re not Mayo.

There’ll be plenty of Galway flags flying around the border country of Creggs, Fuerty, and Athleague, if only because of the sheer number of immigrants that have slipped across the border over the past couple of generations — so says Martin Murray, of Fuerty, who would be delighted to see the Tribesmen, or any Connacht team, win the big prize.

“There’s a lot of houses around here that are half-Galway — there might be one parent from Glinsk or Creggs — so they’d be divided households in that sense. You might even get a Galway jersey or two at training here, though not too many of them,” he says.

“Ah, sure, haven’t Kerry won enough over the years! Any team that can bring Sam Maguire back across the Shannon, good luck to them.”

However, while he would love to see Galway win it, and predicts a bright future for the county, he’s far from confident about their chances of knocking over Kerry.

“Galway being Galway, I don’t expect them to get nervous or anything like that, I’d say they’ll give it a right good run for 55 or 60 minutes. Galway teams tend to be very confident coming to Croke Park. We all remember years ago, Mayo would look like winning, but people would say, ‘The next team to win Sam Maguire will be Galway’, and they probably will. But maybe not this Sunday, that might be too soon,” he adds.

Nowhere is the border between Roscommon and Galway felt more keenly than in St Croan’s, where a significant number of club members consider themselves to be Galway GAA people first and foremost. Lorraine Conneely is one of those, and she describes it as a “mad” feeling to watch her son, Michael, play for a Roscommon club.

Having moved to Ballymoe from Creggs, Lorraine is well-used to living in frontier territory, though, thankfully, she suggests that things haven’t quite reached the level of Kashmir or the Falkland Islands just yet.

“Ah, there is goodwill there — even Mayo people have been wishing Galway well — and everybody is delighted to see someone from Connacht in the All-Ireland final. Galway themselves, I think they’ll be happy to meet Kerry in the final instead of Dublin, and there’s a lot of the big players haven’t even played well yet. Shane Walsh is just a few villages over from us and he’s capable of playing a huge game, so, hopefully, we see that in the final.”

John Carley, who diplomatically describes his home place as “Ballintubber, but near Ballymoe”, suggests that the goodwill would extend to the majority of the local area, though perhaps not quite hit 90%, as suggested to him initially.

“The older generation on the Roscommon side of the border mightn’t be as keen to see Galway win — some of them — but most people would say that an All-Ireland doesn’t come too handy and it would be good to see Galway get one. I certainly would like to see them win anyway.

“My mother’s a Kerry woman, but even she’d like to see Galway win it; she’s down here all her life and Kerry have enough of them won.”

So will there be bunting and flags up in Ballintubber if Galway win?

“Ah, you’re pushing the boat out there. I won’t go that far! Going back even 10 years, the slagging used to be shocking — there was a bit of cut to it — but that wouldn’t be the case with the younger generation. I doubt if Galway will be good enough to win; they certainly can get goals and that’ll help. And if they do win, most people around here will be delighted to see it. Not all, but most of them.”

A lot of Roscommon supporters that live near to a neighbouring county, whether it’s Galway, Mayo, Sligo, Leitrim, or Westmeath, might decide to support or go against their neighbours based on the difficulty of listening to some of the louder supporters of their rivals, or perhaps support them on the basis of giving a boost to a locality, and maybe even the prospect of a good night out across the border.

Tommy Finneran, perhaps influenced by the perspective that comes with serving as club chairman in Castlerea St Kevin’s, instead would be happy to see Galway prevail this Sunday, because it would paint Roscommon’s season in a better light.

“Galway is a Connacht team and who wouldn’t want a team from Connacht to win an All-Ireland?

“There’ll be people going both ways and that’s the beauty of sport, but, personally, you’d have to shout for Galway. It’d show Roscommon in better form than if Kerry won it.

“We went up to Salthill, and we probably felt we could have performed a bit better, and if Galway are good enough to win an All-Ireland, then maybe that means we’re not as bad as what some people are saying.

“A lot of people would have felt for Kerry when Seán O’Shea kicked that point at the end — they were jubilant and rightly so at the end of an incredible game — but they’ve won a lot of All-Irelands, so I think people will be shouting for Galway.” So that’s what he’d like to see.

And what does he expect?

“Galway’s backs should be stronger than Kerry’s, and at midfield you have Conroy and McDaid setting up the chances for the forwards. It’ll be a tough game, but Galway can turn on the style in Croke Park. Deep down, I want Galway, but I’ve a funny feeling Kerry may sneak it.”

There’s nothing quite like the honesty and forthrightness than comes with youth. As a promising Castlerea minor team prepare for their game with Kilglass Gaels/St Barry’s, there’s plenty of reasons why Kevin Hester and John Curran could choose to be diplomatic when it comes to expressing their views on the upcoming All-Ireland final.

John was part of the Roscommon minor panel this year and aspires to play senior football for the Rossies, with the possibility of plenty of contests against Galway to come in his future, while for Kevin Hester, the border rivalry is very much part of his home life, given that his mother is from just down the road in Dunmore. Yet both players are unequivocal: They would be very happy to see Kerry pick up the victory this Sunday afternoon.

“Mam wanted Galway to win and she wanted us to support them as well, but that wasn’t happening,” said Kevin, referring to the semi-final between the Tribesmen and Derry.

“I wasn’t disappointed when Damien Comer scored the goal at the end, but, to be honest, I wouldn’t have minded if they lost either. I’ve a lot of Galway cousins, so definitely for the final, I’d prefer if Kerry won; you wouldn’t have to hear as much from them!”

Curran, who lives on the Ballymoe side of town and so is close to the border, was of the same mind. “I would have much preferred if Derry beat them, and I’d like Kerry to win the final. Galway have a fair chance — they’ve shown what they can do in the last couple of months — and I’d say it’ll be close enough, maybe two or three points in it.”

And if there are two points in it, before a late Galway goal settles the result?

“Ah, no, we don’t want that.” Until the day comes when he gets his next chance to tog out against Galway himself, this young Castlerea footballer, like a lot of his colleagues, is eager to see Kerry do what needs to be done in the meantime. 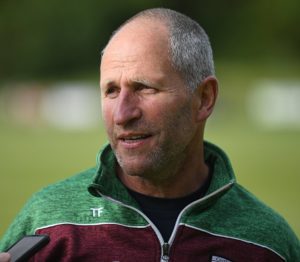 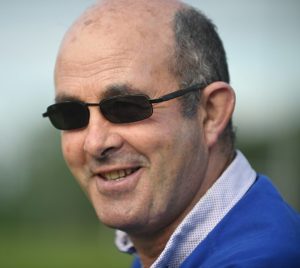 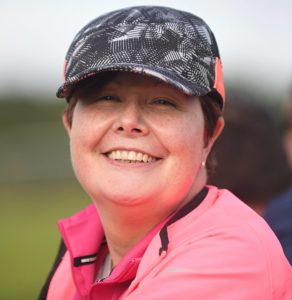