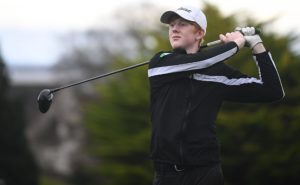 A Roscommon golfer will hope to build on his burgeoning reputation when he represents Ireland in Dundee, Scotland, next week.

Charlie Kelly, a native of Summerhill, Athlone, will be part of the boys’ team competing at the Home Internationals between August 2nd and 4th at Downfield Golf Club.

Olivia Costello from Roscommon Golf Club will be part of the girls’ team.

Having just completed Fifth Year at Athlone Community College, Charlie made the headlines just over a year ago when he was a pivotal member of the Roganstown Golf Club team that won the Senior Cup Trophy — the biggest club trophy for amateur golf in the country.

A few days later, he helped the club, based in Swords, County Dublin, to win the Fred Daly Trophy at U-18 level.

Charlie joined Athlone Golf Club as a ten-year-old before moving to Roganstown three years later. His father Damien was a well-known caddy for well-known Irish golfer Colm Moriarty from Athlone, who is Charlie’s godfather.

He has also played soccer for Monksland United.