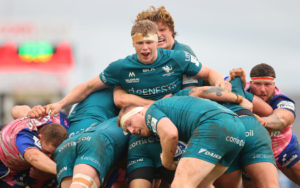 Connacht Rugby has confirmed that its first team will return to Dubarry Park, Athlone, for a pre-season friendly against Sale Sharks on Friday, August 26th, at 7 p.m..

It will be the western province’s first appearance at the venue since 2018, and will allow for Connacht supporters to attend a pre-season game while the new pitch at The Sportsground continues to be installed.Tickets are on sale now at www.connachtrugby.ie, with prices from just €10 for adults, €5 for juniors and €20 for a family ticket of two adults and two juniors.All 2022/23 season tickets will be valid for the game, and e-tickets will be distributed to all Season Ticket holders in advance.In addition to this fixture, a separate matchday squad will also travel to France that week for a pre-season friendly with Castres Olympique. That game will take place on Wednesday, August 24th, in Lacaune with kick-off at 5.30 p.m. Irish time.