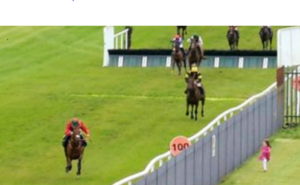 One little girl came very close to meeting one of racing’s top female jockeys at the Roscommon Races yesterday.

This great photo captures the young girl running alongside Rachael Blackmore as the top jockey guided her horse Rioga Choice to first place in the Curraghboy Maiden Hurdle at Roscommon. What a lovely moment for the little girl as she cheered Rachael on to victory!

Rachael Blackmore could not be a better role model for any aspiring jockey or sportperson. Last year, the 33-year-old Tipperary woman became the first female jockey to win the Grand National in the race’s 182nd year.

Sometimes, like in the case of this young girl at the Roscommon Races, it’s good to meet your heroes!