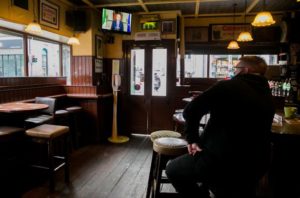 A new report from the Drinks Industry Group of Ireland (DIGI) has shown a stark decline in the number of pubs doing business throughout the country since 2005.

The Irish Pub: Stopping the Decline report confirmed that 72 pubs, including 16 during Covid-19, closed throughout County Roscommon between 2005 and 2021 — a decrease of 28.3 per cent.

Nationally, 1,829 pubs shut their doors during the same timeframe, including 349 during the pandemic — a decrease of 21.2 per cent.

All 26 counties experienced declines in pub numbers through the 16-year period. The largest decrease was seen in Laois with 30.6 per cent less pubs since 2005.

The report, which was based on the DIGI’s analysis of Revenue license data and including an economic and social analysis by Dublin City University (DCU) economist Anthony Foley, highlighted that many public houses operate at relatively low levels of sales volume.

Paul Clancy, DIGI member and CEO of the Vintners Federation of Ireland, described the report as “alarming” and called on the Government to reduce excise tax to support the industry with meaningful measures that would be felt immediately and reduce costs overnight for tens of thousands of business owners.