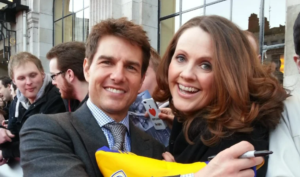 Tom Cruise signing a Roscommon jersey for Ruth Scott in Dublin back in 2013.

With confirmed reports that Tom Cruise’s private jet touched down twice in Ireland over the last few days, can we expect the Hollywood star to make a secret visit to his family roots in Roscommon?

Cruise’s plane was tracked leaving the US in the early hours of Monday morning and touched down in Shannon before flying further south towards Kerry Airport.

This has fuelled speculation that the movie megastar is currently holidaying in Ireland, using Kerry as a base.

Back in 2013, genealogy research commissioned by The Gathering showed that the A-list celebrity could trace his roots to Kilteevan in mid-Roscommon through the Mapother family.

Is Tom now planning a secret mission to his Rossie homeplace? Unfortunately, that may be classified information!