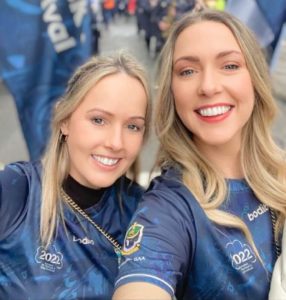 Julie Curley (left) with her sister Aisling at the St. Patrick’s Day Parade in London.

As Chloe Kelly wheeled away to embark on her iconic celebration after scoring the winning goal for England at the Women’s European Championships on Sunday evening, her former PE teacher was back in South Roscommon with a big smile on her face.

Julie Curley had returned to Clonellan, Athlone, to visit her family, including her parents Paddy and Kathleen. She also caught up with close friend Kelly Marie Neary and her husband Dermot, a former Elphin footballer, in Monksland for their daughter Eleanor’s (Julie’s godchild) tenth birthday.

As the Lionesses subsequently ensured that football was finally coming home, thanks to Chloe Kelly’s match-winning intervention, pride and excitement coursed through Julie’s veins.

“I was so proud and honoured to know Chloe, and to have seen her in the very early stages of her football career,” she outlined.

A former club footballer with Clann na nGael, Julie moved to London in 2001 to train as a PE Teacher in St. Mary’s, Twickenham.

“I would have played all the way up with Clann na nGael. The team reached the All-Ireland final in 2001 but I injured my knee in the county final, so I missed out. My sister Aisling played in that match,” recalled Julie.

“Secondary schools are much bigger than at home in Ireland, so I was one of a few PE teachers that taught Chloe.

“From the beginning, she was an exceptional talent. My first memory of her was in the playground, and she was doing keepie uppies. There was a large group of people around her. Her skill level was unbelievable. I just thought ‘wow, who is this kid?’. It didn’t take us long to realise just how talented she was. She was a phenomenal athlete,” she remembered.

While attending secondary school, Chloe signed for QPR and subsequently for the Arsenal Academy. She currently plies her trade with Manchester City.

“Chloe came back to us in 2015 when one of the teams from our school made the national final in Wembley. She did a training session with the girls. She spoke to them about playing on the big stage.

“She’s just so humble and very honest about her journey. She has remained true to her roots. In September, we hope to welcome her back again. She’s an inspiration for future generations,” she highlighted.

As she watched history rewritten from her family home, it was no surprise to Julie that Chloe made the headlines.

“She had just returned from injury. She only went back training in May. To get near the squad was huge for her, having been out for so long.

“Throughout the Euros campaign, she had been coming on in the second half of games and making a real impact. As soon as she came on, she started to make a difference. I knew from previous experience that she’s such a threat when she’s on the ball. To see her score the winning goal was an unbelievable feeling,” she concluded. 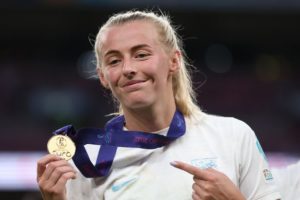