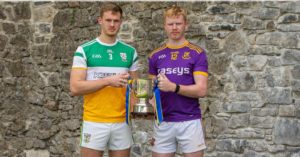 After exploding onto the scene by beating St. Brigid’s in the first round of the 2021 championship, Oran’s campaign ended at the hands of Roscommon Gaels after a dour and error-ridden contest at Dr. Hyde Park.

Billy Donnellan’s side have a chance to exert revenge this weekend, and while the stakes aren’t as high, it would be a huge setback to the club if they were unable to seize this opportunity.

The heralded return of Cian Connolly and Scott Oates to the town club hasn’t materialised, with Scott Oates likely to miss the season with a collarbone injury, while those two men are joined on the absentee list by Shane Purcell, Tim Lambe and Paddy Mahon, with Peter Gillooly also unlikely to feature.

Those absences have opened the door for teenagers like Ethan O’Reilly, Senan Lambe and DJ Hession to step up.

Oran have their absences too — Jack Earley will miss the year with a cruciate ligament injury, while Darragh Walsh and Liam Earley are on the list of 60-day sanctions. Nonetheless, it’s a decent Oran panel, bolstered by the return of Declan Leonard, and crucially, the extra year of development should stand to them.

Oran, the 2020 intermediate champions, burst onto the senior scene in style when they knocked over St. Brigid’s on the opening night of the 2021 championship. Now St. Faithleach’s have the chance to repeat the trick, and there’s every reason to believe they might do the same.

At the start of 2021, there was quite the distance between these sides. Now, St. Faithleach’s have the confidence of winning a Connacht title, and the loss of Kevin Farrell to a cruciate ligament injury is more than balanced out by the return of Cian Glennon and Liam Ormsby from injury, not to mention a decent selection of last year’s successful club U-20 side hinting at their readiness to make the step up.

Emmet Durney was relatively late into the job as Clann senior manager and he’s been dealt an incredibly tough hand. Last year, three Clann players made the Roscommon Herald Team of the Year — Fearghal Lennon, Ciarán Lennon, and Jack Connaughton. They, along with Stephen Flynn and Oisín Lennon, are all away until later in the year.

Add in Ronan O’Reilly’s deployment abroad, and it’s a much-depleted Clann team that will take to the field.

In this group, they’ll find the going tough. Their one trump card here will be midfield, while there are some promising youngsters such as Darren Quinn and Alan McManus waiting in the wings, but that might not be enough.

There wasn’t much to call between these two sides in the final of the O’Rourke Cup, and in a championship where there aren’t a lot of teams showing form, Boyle are making a lot of the right moves.

Even in the short-term absence of Enda Smith, there aren’t too many club managers in Ireland with the type of scoring power at their disposal that Cian Smith has to work with this summer.

Daire Cregg and Cathal Feely, from the county U-20 team, are adding yet more class to the group, and while there are some concerns over their defensive ability, not to mention their temperament in big knockout games, neither of those two question marks are likely to be tested this Friday.

Western Gaels came within one late, unconverted goal chance of dropping to intermediate football at the end of last year. They never should have found themselves in that situation, and they should be better this year, even allowing for two huge defensive losses to injury in the form of Seán Conry and Aidan Dowd.

Their problem, however, is that in this company, “better” still could see them in a relegation play-off.

There were 15 points between the teams when these sides met in last year’s championship play-off fixture, though at the time, even the most optimistic Pearses supporters wouldn’t have dreamt of the year that their club was about to have.

They come into this tie as Connacht champions, but optimism is very much in short supply around Woodmount this year so far. Anthony Butler’s long-term injury, a handful of players abroad, and a general lack of zip in their league performances means that the season has yet to catch fire for the reigning champions.

If they were playing either of the other two teams in the group, they might pay the price for it, but Gary Donohue has a few problems of his own to deal with, and Tulsk might not be in a place to take advantage.

Regan Fahey, Robert Kelly, Gerry Galvin and David Carleton aren’t star names around the county, but they are very steady club performers, and, under normal circumstances, they would make up four of the starting six forwards on a full-strength Tulsk team. Friday, they’re all unavailable for various reasons.

Seán Murray and Daniel Connolly have stepped up to the mark in their absence and there’s enough in this Tulsk group to cause a misfiring Pearses side some problems. Not enough to win the game, however.