Cregg gets Boyle off to a flyer 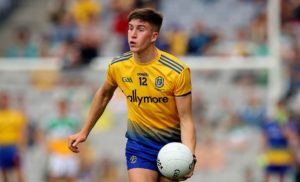 Daire Cregg produced a superb display as Boyle replicated their senior league final triumph against Western Gaels in the opening round of the senior football championship this evening.

The home side were in the box seat at half time, thanks to three goals in the opening quarter from Cregg (2) and Donie Smith.

Western Gaels, inspired by Cathal and Finbar Cregg, improved in the second half but they had left themselves with too much to do.

The visitors were a point to the good at the break but two rapid-fire goals from Cathal Shine and Josh Lennon set Emmet Durney’s side up for a seven-point victory.

Oran secured a famous 1-13 to 2-8 victory against neighbours Roscommon Gaels in an error-ridden contest in front of a big crowd at Rockfield.

Ciarán Lawless and Richard Walsh shared first-half goals as Billy Donnellan’s side led by 1-6 to 1-3 at the break.

Inspired by Charlie Carthy, who kicked 0-8 overall, Oran eventually got over the line, despite a late Roscommon Gaels goal from Joey O’Malley.

Defending county and provincial champions Pádraig Pearses had things all their own way against Tulsk at Woodmount, strolling home on a scoreline of 1-21 to 0-8.

Paul Carey and Eoin Colleran were to the fore as Pat Flanagan’s side led by 0-10 to 0-4 at the break. Midway through the second half, Tom Butler hit 1-2 for the hosts to seal a facile victory.

*Match report on all four games in Tuesday’s Roscommon Herald