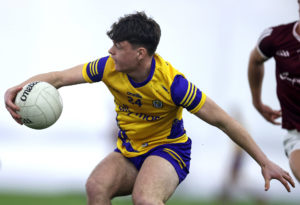 Ben O’Carroll was at his mercurial best in Kiltoom this evening.

2020 county champions St. Brigid’s came through a thrilling, high-quality clash with Strokestown at Kiltoom this evening to confirm their status as front runners for the 2022 Roscommon SFC, with Ben O’Carroll’s 0-8 (0-3f) the key contribution in their 0-19 to 1-13 win over the East Roscommon side.

Shane Cunnane and Conor Gleeson were also impressive in the first half as Jerome Stack’s side built up an 0-11 to 0-5 lead, which they maintained for most of the third quarter when the sides went point-for-point for long stretches.

However the tide turned coming into the last ten minutes when points from Shane McGinley and Colin Compton, as well as a wonderful individual goal from Diarmuid McGann, cut the gap to a single point.

Late scores from O’Carroll and Robbie Dolan saw Brigid’s over the line however, with Conor Hand and Davy Cunniffe helping them over the line after coming off the bench.

At Orchard Park, a tense game between Elphin and Michael Glaveys was eventually edged by the away side, 1-10 to 0-10, with two key moments right after one another in the final quarter proving crucial.

Luke Mollahan’s sending off after a second yellow in the 51st minute was followed two minutes later by a goal from the roving Michael Glaveys centre-back, Stuart Daly. This key score proved to be the difference between the sides in the end.

It was the Fintan Cregg and Andy Glennon show in the first half. The veteran Elphin pivot at centre-forward showed touches of class with a haul of 0-4, including a mark and a free.

Andy Glennon then took centre-stage in Glaveys’ purple patch, which saw them land five consecutive scores, four off them coming off the boot of the powerful full-forward. The visitors led by 0-8 to 0-6 at the break.

Both Cregg and Glennon had less of an influence in the second half and it was anyone’s game until Glavey’s match winning goal seven minutes from time.

The intermediate championship also got underway today, where St. Dominic’s and Fuerty picked up expected wins, while it finished St. Croan’s 1-14 Creggs 2-11 at Enfield.

Creggs got off to a perfect start with a goal from Enda Conneran after just 15 seconds and they still led at half-time, 1-4 to 0-5. Damian Goggins’ goal five minutes after the restart put Croan’s ahead for the first time, before Conneran replied with a green flag for Creggs on 39 minutes. The remainder of the game was nip and tuck, although Croan’s looked the likely winners when they went two points up in the 57th minute. However a couple of late frees from a dogged Creggs side gave them a share of the spoils.

Tulsk was the setting for St. Dominics’ 2-13 to 0-13 win over Shannon Gaels, where Darren Donnelly for the winners finished with a haul of 1-10, mainly from placed balls, while on the opposing side, Evan Corcoran (0-7) and Matthew Bourke (0-5) were the chief scorers.

In the first ten minutes of the game, the Gaels looked in all types of trouble as St. Dominic’s raced into a 1-3 to 0-0 lead, the goal coming from their corner-back, Kyron Dockery.

But two superb long range points from full-forward Matthew Bourke midway through the half lit the fuse for Shannon Gaels who were down by a mere goal (1-5 to 0-5) late on in the half.

James Deane’s men were rocked by a second goal almost on the stroke of half-time when ‘keeper Marcus Feeney took down Donnelly, who coolly slotted home the penalty to leave it 2-6 to 0-7 at the break.

The Gaels stood toe to toe with the Doms for much of the second half but the two first half goals always provided a cushion for Tomás Gilleran’s men.

Finally in Kilmore, Cian Murray’s late goal was the clinching score for Fuerty, who beat the home side by 1-11 to 0-10. Paul Garvey (0-6, 0-4f) kept Kilmore in a tight game where they struggled to generate enough attacks, with Jack McGahan (0-6f) ensuring that the mid-Roscommon club kept pace with their hosts throughout.