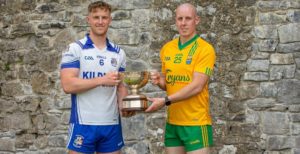 After losing the last two finals. St. Dominic’s will be hoping that it’s a case of third time lucky as they open their campaign against Shannon Gaels on Saturday evening.

These clubs met in the corresponding fixture last year, when a late goal from Darragh Heneghan confirmed a flattering six-point winning margin for the home side in Ballinlough.

On the basis that there was 14 points between the teams in 2020, Elphin are making progress — and when one considers the list of players that is unavailable to manager Iain Daly, it’s impossible to foresee a happy ending for them here.

Cathal Heneghan and Eugene Stritch are out for the year, Darragh Heneghan and Conor Hussey won’t play till September at the earliest, Gary Patterson is away, and Dylan Ruane is in America.

Elphin have their absentees too, most notably Shane Killoran, but Basil Mannion found a way to make the team competitive with several players absent last year.

Admittedly, goalkeeper Aaron Brady was crucial to their cause and he too is in America, but our gut feeling is that a forward line shorn of three quality players, in the shape of Ruane and the Heneghan brothers, won’t ask enough questions of whoever Mannion deploys between the posts.

They might not have won the league, but four rounds in, St. Brigid’s looked hugely impressive, with a 100 per cent record and an average winning margin of just under ten points.

It’s hard to know if that means that Jerome Stack had them closer to peak fitness a bit sooner than most of their rivals, or if the Kiltoom-based club have rediscovered their hunger after being usurped by Pearses in last year’s semi-final. Either way, they are one of very few clubs that we can say with any degree of confidence that they should hit the ground running this weekend.

Strokestown have a decent record in this fixture, but they’ve lost a lot of key players, with both Comptons unlikely to feature this week. Shane McGinley and Colm Neary are among the most promising young players in the county and they will have a bright future for the town, but a game like this looks a bit like too much and too soon for them.

There’s too much talent in Creggs for them to be a Tansey Cup team, and they proved that during this year’s league as they sauntered to victory.

Ronan Dowd has come back to add to their attack, ex Mountbellew-Moylough player Peter Kelly has been a very useful addition to the backs, and Darren Gately is very much has the X Factor up front, capable of beating players and creating goal chances, either for himself, or quite often for his brother Noel beside him.

For St. Croan’s, the league was a different story, as they ended up relegated. On the face of it, that would suggest they’re in trouble – but there was more to the story.

Despite losing Aidan Brogan, one of the most consistent scorers in senior football for some years now, they averaged a respectable 15 points per game, and ended the year with a zero scoring difference.

Seven of their nine games were decided by four points or less. The results of those games? Two draws, and five defeats. That might suggest that Malachy Gately actually has the team moving reasonably well, or it might suggest that confidence is on the floor, and they just can’t win a tight game.

Logic says Creggs to win well, but experience tells us that this has all the makings of a game where a grizzled Croan’s side might just burst the bubble of their in-form neighbours.

Kilmore showed traces last year of being far, far better than their place in a relegation play-off might have suggested. They’re still lacking the touch of class up front that might put them in the mix for an intermediate title, but they’ve quietly set about the task of replacing a few heavyweight stars that had moved on from playing senior or intermediate football — most recently Ray Caslin, who has stepped back to junior this year.

Fuerty did what they needed to do in the league, finishing in the top two and earning promotion. Yet their league final was something of a blowout, and ongoing knee and ankle problems for Niall Kilroy are a huge concern and Gearóid Ennis moving to Clane is also a blow.

There is young talent in Fuerty and they’ll be in the mix this year, but they’ll do well to come out of Kilmore with a result this Saturday.

On what has been a busy summer for foreign travel, these two clubs have been harder hit than most.

Jack Lohan, Daire Keenan and Keith Doyle are all on sanctions and thus St. Dominic’s will take some time to hit the ground running, but Shannon Gaels too have lost key men in Matthew McDermott, Matthew Mulvey and Shane O’Dowd.

Tomás Gilleran has lost three players that have been in and around county underage panels, but he also has a much better group of replacements ready to step in, with the likes of Mark Watson, Karol Feerick and Cian Kelly all likely to step up from playing junior ball in 2021.

Shannon Gaels will welcome back a tidy player in Matthew Bourke, and there is a competitive streak in the Croghan-based club that will give the Doms plenty to think about this week. Neither will the favourites forget about their most recent championship meeting in 2020, when they needed a goal to fall over the line in Knockcroghery.

That memory will probably keep them honest and see them through.

It was very much a league of two halves for St. Brigid’s, who started off with four defeats on the spin before finishing up with four wins in their last five games, punctuated by a one-point defeat to Kilbride. This is a very young group, with very solid performers like Mark Daly, Shane Fuery and Davy Cunniffe operating in the diamond, while Eoghan Derwin leads the attack.

It’s not often that a Division Five League game is something we note in an intermediate championship preview either, but the sight of Senan Kilbride togging out for their third team in that league decider was very interesting. Depending on what his plans are for the year, he might use the intermediate championship as a bridge to get ready for maybe playing a part in their Fahey Cup bid later in the year.

St. Aidan’s had a dreadful league campaign in the Tansey Cup, albeit losing three games by a single point, and by that measure, they’ll find it very tough this Sunday, particularly in a venue that should suit the younger and livelier Brigid’s side.

However, they’ll get some reinforcement from the Four Roads hurling panel this week, while the return to action of Luke and Eoin Fallon is also a boost. The local element might also keep this one very tight.

Higher up in these previews, we detailed all the players that have been stripped out of the Clann senior team, and naturally, the replacements will have to come from Denis Gavin’s intermediate group. With stalwarts like David Flynn, Matt Scally and Johnny Dunning all retiring into the bargain, another run to a county semi-final looks very unlikely.

Éire Óg might not be the force that they were in 2021 either. Denis Barron’s ACL injury is a huge blow, as he is the fulcrum around which this team is built, while Enda Crawley will also be missed from the middle third, albeit Éire Óg have more midfield options than most clubs, never mind most intermediate clubs.

Right now, however, barring Paddy Harney puts in the performance of his life to complete curtail Conor Cox, there’s only one way this tie should go.

There’s a bit of a revival underway in Kilbride, and while losing Henry Walsh to London is a blow, there’s a sense of optimism in the club that some younger footballers like Matthew Shally, Aodhán Looby and Oisín O’Beirne might be able to make a real impression this year.

Their league form was not unlike their championship form in recent years — plenty of scoring power, but dismally weak at the back — and that bodes well for Adam McDermott and the rest of the Castlerea forward line this week.

A long-term injury to promising wing back Shane Keenan offers a chink of light to Kilbride, as does Jonathan Hester’s trip to the States on a J1, since he was a game breaker from midfield on a couple of occasions in 2021. Take Fintan Kelly out as well, and Castlerea aren’t all that they could be.

They might still be good enough to win this, however.